Squeals of delight echoed off the walls of our tiny concrete playground as we took our stance, lined up arm and arm, ready to guard the make believe goal behind us. 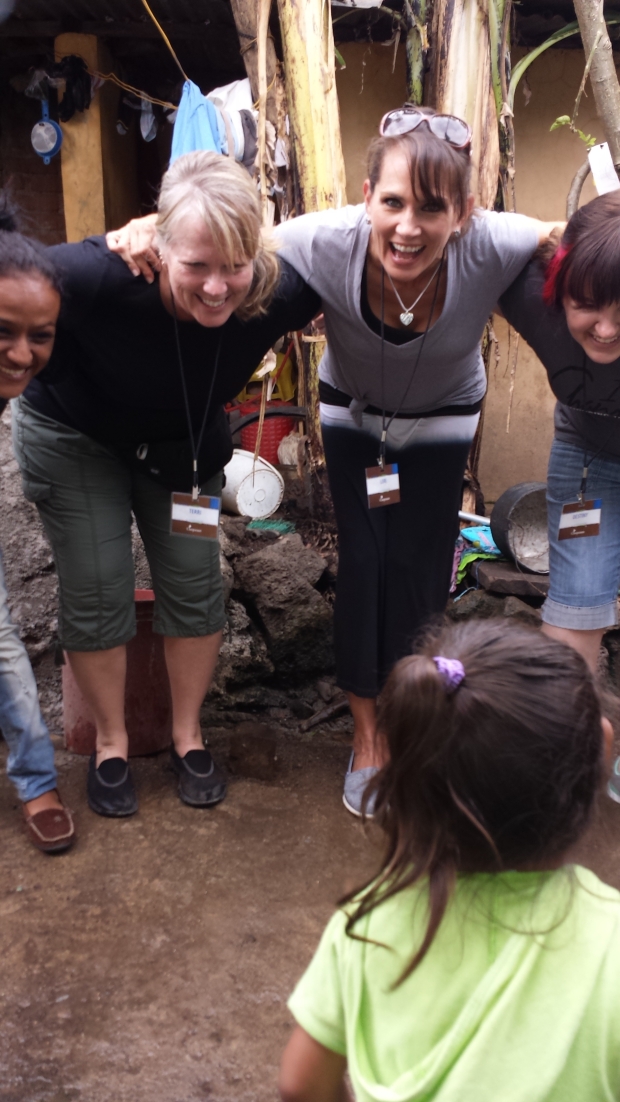 Our three year old opponent was in position eyeing us up, a look of determination on her face. With her tiny foot posed behind the lopsided pink ball, she counted, “Uno dos tres!” Suddenly the ball was sailing toward us and more squeals of delight erupted as the ball made its way through our legs and into goal. We all cheered as three year old Genesis jumped up and down, clapping her hands in sheer delight. “Score!!! Mine! Mine! Mine!” she said.

Her joy was contagious and we couldn’t help but join her in the celebration. There was so much to celebrate today because not only was Genesis winning in this game of soccer but she was also winning in life!

This was my second day El Salvador and that morning our group had visited a Compassion child survival program called “Little Friends of the King” and now this afternoon we were visiting three year old Genesis and her mother Vanessa who are part of that program.

In the area where Genesis was born the infant mortality rate is very high. Many babies never make it to birth and many who are born never make it to their first birthday. If Genesis’ mother ‘Vanessa’ had not been a part of the child survival program Genesis may have been very different from the child we were playing soccer with today.

Being in Compassion’s Child Survival Program helped Genesis’ mother to learn how to take care of herself and her baby during her pregnancy and after by giving her pregnancy coaching, medical care, and emotional, nutritional and spiritual guidance. Vanessa also learned how to care for Genesis after she was born and Genesis also receives medical checkups and her childhood immunizations.

The Child Survival Program also has vocational training such as cosmetology, jewelry making and sewing classes.

Vanessa showed us a sewing machine that was given to her by Compassion and she told us that at the CSP she was able to learn how to sew and she showed us clothing that she makes and sells in the market. Learning this valuable job skill has helped Vanessa to be able to support herself and her daughter financially.

It was very obvious how much being a part of this program has made a world difference in Vanessa and Genesis’ lives and has helped Genesis to develop into the healthy, bubbly little girl we were playing soccer with today.

Our game of soccer continued most of the afternoon with Genesis making the rules. We didn’t mind at all to be playing by the rules of a 3 year old because Genesis’ rules were fair (and also a lot of fun!).  We all took turns playing each position.  There were only two positions, you were either a Kicker or you were a Goalie and you clapped and cheered when anyone scored. 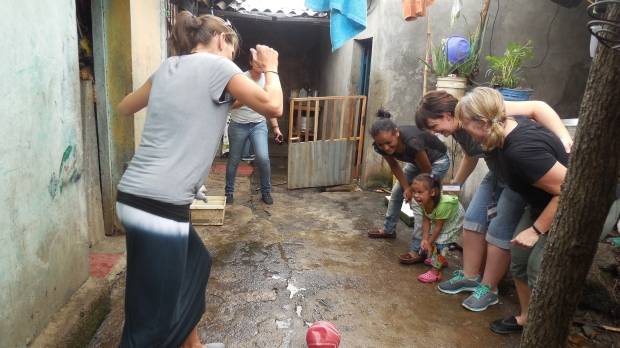 As each of us took our turn to kick the ball Genesis would place the ball on the spot where we would kick it from. When it was my turn to kick the ball, just as I was getting ready to kick, Genesis suddenly moved out of her goalie position, picked up the ball and moved it closer to the goal. We all laughed and then I took my turn kicking the ball from my new spot which was closer and gave me a better advantage of getting it in the goal.

I didn’t think too much about Genesis moving the ball closer to the goal at that time but now I have had a little more time to think about why Genesis may have decided to move the ball closer when it was my turn.

I have a knee problem which causes me not be able to walk or jump very well and though I never said anything about it to anyone, I think Genesis still may have noticed and I think maybe she didn’t want me to be at a disadvantage when it was my turn to kick the ball.

Something I noticed about Genesis’ game of soccer is that no matter which team we were on we were still all winners and we were all cheering each other on.

Because of the small space we were playing in, the goal was only about four feet away, but I am guessing that in the eyes of a three year old, four feet must look pretty far and when it was my turn to kick the ball Genesis made sure I would have a fair chance at getting the ball into the goal just as everyone else did.

Being in Compassion’s Child Survival program has given Genesis the advantage that she needs too.

Because of the assistance and the hope her mother receives Genesis was given a fair chance at life and now she is a healthy, joyful and thriving little girl today!

Isn’t she just the cutest?!! You can see the joy just radiating out from her and believe me when I say, her joy  IS contagious! 🙂

If you would like more information about how you can help mothers and babies like Vanessa and Genesis receive a fair chance, you can visit Compassion’s website by clicking on any of the pictures in this post.

Thanks for reading and have a blessed evening!

9 thoughts on “Everyone Deserves a Fair Chance”