What does it feel like to not be chosen? Or how about being chosen last?

How about picking teams in gym class when you were a child in school?

Were you the person who was chosen first? Or were you always chosen last?

Because of my lack of athletic abilities, I was pretty much guaranteed to be chosen last in gym class for any type of team sport game.

Here’s a classic example of what usually happened when I played team sports.

I was in 5th-grade gym class and kickball was the game.

Most days when we played kickball and it was my turn, I would kick the ball and someone from the other team would catch it right away causing me to never make it to any base, I was usually an easy out.

This day was a little different though.

This day I actually kicked the ball so high that it went soaring over everyone’s heads into the outfield.

Why was I horrified you ask?

Because I never got this far in a game so I wasn’t for sure what I was supposed to do next! Everyone on my team was yelling, “run! run! run!” So run is what I did. I ran as fast as I could go to first base, but I didn’t stop at first. When I got to first base I’d heard the kids yelling and clapping so I decided I would keep going. I finally stopped on second base.

I was so happy!

But that happiness was very short-lived when my teammate who was ALREADY on second base said, “What are you doing?! Go back to first base, you dummy!” just as someone from the other team threw the ball at me and yelled, “Out!”

By now the kids on the other team were laughing at me and my own team was super angry with me.

I really had no idea as I’d rounded first heading for second that two people weren’t supposed to be on the same base together. I was so embarrassed that I just wanted to melt into the ground and be invisible for the remainder of my school life!

As you can see sports were not my thing and if I could have had it my way, I would have been perfectly happy to have skipped the whole gym class thing. Had there been a reading team or and art team those would have been the teams for me.

Not to sound braggy but I may have even been the first pick for an art team or some sort of speed reading team.

The funny thing is… well… actually the not so funny thing is… that I never saw that I had an art talent as a child.  All I could see was the fact that nobody ever chose me to be on their team because I was terrible at sports.

3 Praise be to the God and Father of our Lord Jesus Christ, who has blessed us in the heavenly realms with every spiritual blessing in Christ.4 For he chose us in him before the creation of the world to be holy and blameless in his sight. In love 5 he[a] predestined us for adoption to sonship through Jesus Christ, in accordance with his pleasure and will— 6 to the praise of his glorious grace, which he has freely given us in the One he loves. 7 In him we have redemption through his blood, the forgiveness of sins, in accordance with the riches of God’s grace 8 that he lavished on us. With all wisdom and understanding, 9 he made known to us the mystery of his will according to his good pleasure, which he purposed in Christ, 10 to be put into effect when the times reach their fulfillment—to bring unity to all things in heaven and on earth under Christ.

11 In him we were also chosen,[d] having been predestined according to the plan of him who works out everything in conformity with the purposeof his will, 12 in order that we, who were the first to put our hope in Christ, might be for the praise of his glory. 13 And you also were included in Christ when you heard the message of truth, the gospel of your salvation. When you believed, you were marked in him with a seal, the promised Holy Spirit, 14 who is a deposit guaranteeing our inheritanceuntil the redemption of those who are God’s possession—to the praise of his glory. Ephesians 1:3-14 NIV

It doesn’t say we were chosen because of our talent, our knowledge or how good we are.

What it does say is that He chose us long before He created the World and He chose us to be holy and blameless in his sight.  He predestined us for a relationship with him through JESUS!

How cool is that?? We don’t have to be good at anything at all. Because WE were already CHOSEN! Can you believe it God chose each one of us because he wants us on His team?

In the world, we live in its easy to focus on what we are not good at instead of what we ARE good at. We tend to focus on what our friends are chosen for when actually God gave us each our own special talents to use for what he chose US for.

The same also goes for YOU.

You’ve already been chosen to be on ‘Team Jesus’.

So what do you say? Your spot is open waiting for you to fill it, nothing else required except that you believe in Him. 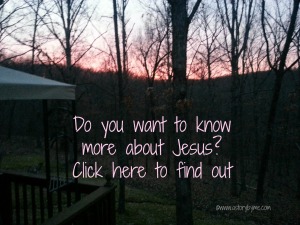 4 thoughts on “I am Chosen and So ARE You”